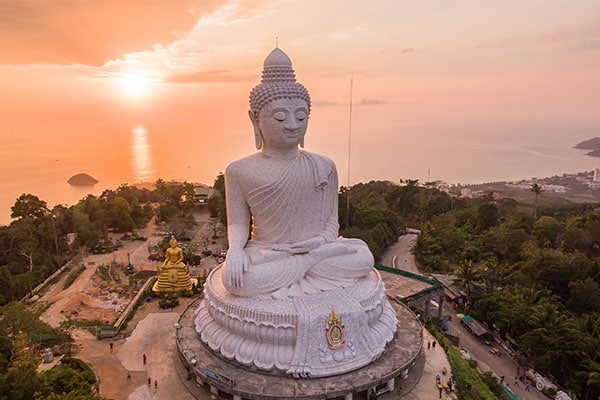 All you need to know about Big Buddha, Phuket

The island of Phuket is packed with magical and breathtaking destinations, and there is something to do each and every day that you are here, but one of the most important destinations and landmarks is the Big Buddha, Phuket. Phuket Big Buddha is one of the most respected and well-known places to visit, not only in Phuket but in the whole of Thailand.

It is without question one of the biggest and most important landmarks in Phuket. The statue was built back in 2004 and it has been standing there proudly ever since. The name of the statue, as known among locals is Phra Puttamingmongkol Akenakkiri Buddha. The structure is an astonishing achievement, a tremendous combination of concrete and shiny Burmese white jade marble. Making it eye-candy, both from down the hill, but most importantly right beside with a spectacular view of Phuket that surrounds the structure.

Besides the Big Buddha, Phuket’s biggest landmark, you will also find a smaller statue of Buddha that surrounds the site which is golden in colour, making the spot feel even more sacred. These two monuments sit alongside an array of other statues of Buddha and monks. The serenity of this spot is indescribable, and the essence of being surrounded by the statues and engulfed in the views and the sound of the bells is hard to beat.

How do I get to the Big Buddha?

The road to the beautiful statue also provides a nice opportunity to follow the road leading up the hill that is located near Chalong Bay, and off Chao Fa Road East. This scenic journey is highly recommended. In addition to the actual road to the statue, there are plenty of tours offered to take visitors to the Big Buddha offered by a wide range of tour operators.

Where is the Big Buddha statue located?

The huge statue is located in the south, close to coconut island Phuket, and it can also be seen from a long distance within the area. If you are around there, then you won’t miss it. It stands tall and proud on a hill in Chalong, and more specifically, Chang Wat Phuket.

What should I wear to Big Buddha Phuket?

The Big Buddha Phuket is a religious site and it is disrespectful to go there with beach clothes or short skirts and graphic t-shirts. Religion is very important to the Thai people and they expect others to pay the same respect to their sacred places as they would do for you. If you are in your vacation clothes though, you are able to ask for a sarong in order for you to cover up any areas of your body, or graphic clothing, considered disrespectful.

How much does Big Buddha weigh?

The weight of the Big Buddha statue is not 100% known but a good indication is the reinforced concrete that is covered with Jade White Marble tile, which weighs 135 tons per 2500 sq.m. How tall is the Big Buddha?

The Big Buddha stands 45 meters tall and it oversees the beautiful area of Phuket and all the people in the area, making it one of the most celebrated beacons of religion in Thailand.

The immense stature of the structure is adored by thousands of visitors every year and it has become a go-to destination when someone visits Phuket, Thailand. It is important for many tourists around the world to visit the most important religious locations, in order to get to know the religion and the country itself even better, than they would do just by visiting the area in general.

Can you walk to Big Buddha Phuket?

Not only can you walk to the Big Buddha Phuket, but there is also a fitness challenge associated with it! If you are involved with fitness, you will love this run (and even people who are not that involved with fitness). The Big Buddha run in Phuket is being organized almost every Tuesday and it is a tough running challenge that leads to the top of the 6km hill. If you are willing to take the challenge, then they say that you will experience one of the best runs of your life. The jewel of Chalong Bay

Thailand and Phuket, in general, have plenty of amazing treasures to visit and be amazed by, but the Big Buddha Phuket is one of the must-see locations when you visit Phuket.  Don’t miss your chance to stand right beside this amazing marvel of engineering and look at the unrivaled view of Phuket complete with a panoramic 360 view of everything that surrounds this gigantic statue.

Visiting the Big Buddha Phuket will be one of the experiences of a lifetime. But for other similar experiences that are hard to beat, try a Simba boat tour to some of Phuket’s finest travel locations.

The Magic of Similan Islands