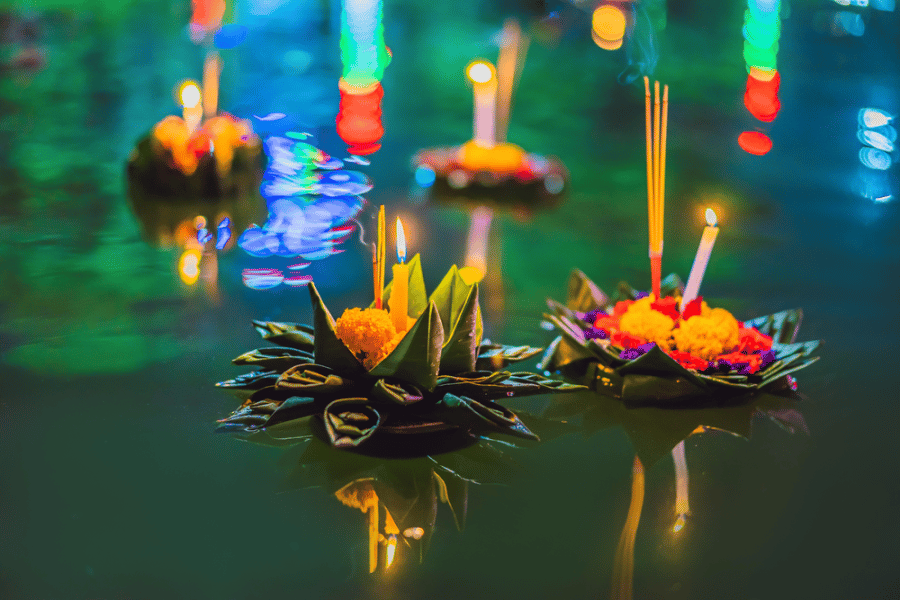 Loi Krathong is one of the most high-spirited festivals that are celebrated nationally in Thailand. People refer to this famous floating lantern festival or float a basket festival as the ‘festival of lights’. Much as it is not an official public holiday in Thailand it is a Buddhist festival that is highly looked forward to and celebrated in Thailand.

To show you how valued this exuberant festival is, it is also celebrated by few neighbouring places outside Thailand. The only difference is that it goes under different names there. In Sri Lanka, they call it Il Full Moon Poya, in parts of Myanmar, it goes by Tazaungdaing festival while the Cambodians call it Bon Om Touk.

How is the date of the festival of lights determined?

The date of this festival is not fixed. It changes every year. Like most other Buddhist holidays, what usually determines the date is that the festival occurs on the night of the full moon of the 12th month of the Thai lunar calendar. Normally as per the Gregorian calendar this infamous festival falls on the month of November every year (or October and November as per the Western calendar). It’s only the dates that keep changing. So typically, the date is announced a month before the festival.

The Thai people will be celebrating Loi Krathong 2021 on the night of Friday, November 19th.

What does the name as well as the festival mean?

Remember earlier when we mentioned that it’s a floating lantern or float a basket festival? Well, ‘Loi’ means ‘float’ whereas ‘Krathong’ refers to a small basket which is usually adorned with flowers, candles, banana leaves and incense sticks. Hence the ‘float a basket’ festival.

So, the festival is to get rid of misfortunes by floating them away in the baskets. It’s meant to cleanse people’s minds, lighten their souls and give them a fresh start.

On the evening of the festival, the locals of Thailand meet together to release the Krathongs in to rivers, lakes, and canals as the seek for purification and forgiveness from the Goddess of Water.

The origin of the festival

The festival originated in the oldest Sukhothai Kingdom which goes 800 years back and is related to Lord Buddha and water.

The Loi Krathong Festival originated in the ancient Sukhothai Kingdom which dates back 800 years. It is a festival that is closely associated with water and Lord Buddha. Because it was believed that the people of the Sukhothai Kingdom and the Thai locals today are closely connected to water and rely heavily on agriculture, they had to pay tribute to the river goddess Pra Mae Khongkha and Buddha and show gratitude for the water resources that they had in plenty as well as ask for forgiveness for the water pollution they have caused.

So just like 800 years ago, people are also looking forward to wash away sins of the past year and look forward to a clean state and good fortune the following year. Its all about letting go of past anger and hatred of any form.

Place the festival is celebrated

Much as the Loi Krathong 2021 will celebrated all over Thailand, there are specific places where the festivities happen on a massive scale. If you want to have the full experience here are the places to consider…

How long does the festival last?

Usually, it lasts 3 days in most places in Thailand. The place that the celebrations last for 5 days like I mentioned above is at Sukhothai. Preparations as well as decorating for the festival are usually organized about a week before the festival.

Planning for the 2021 festivals?

As per Thai government travel by foreign tourists will begin on October 1st, 2021. Due to the Coronavirus Pandemic (COVID-19), only those who have been vaccinated and hold the inoculation certificate will be exempted from quarantine. There may also be some changes to the details of the event. So, contact your travel agency before making any travel plans.

Things to do in Wat Cherngtalay