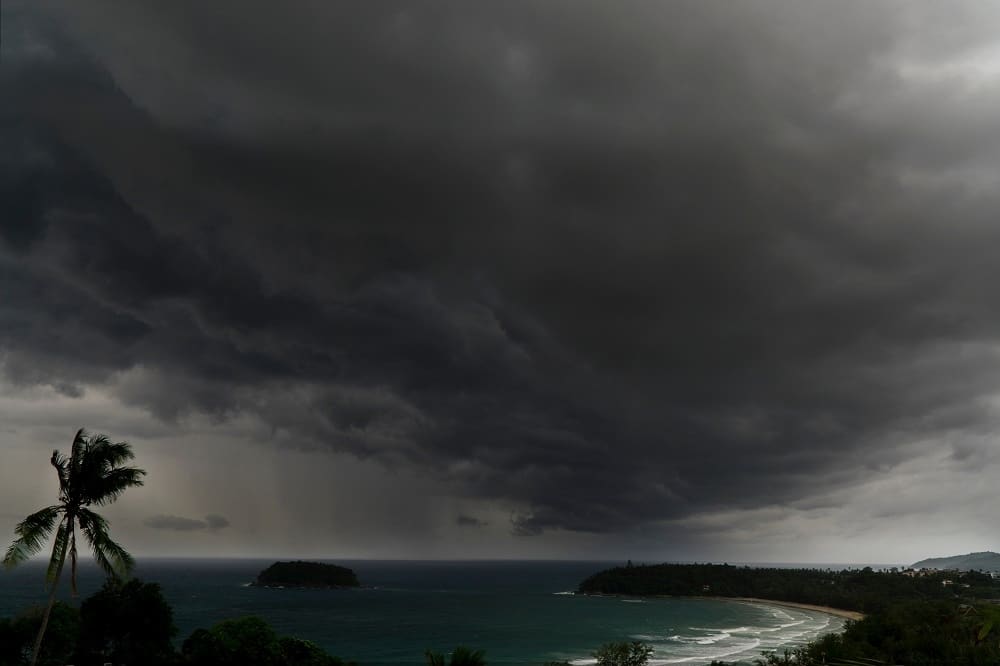 So, we find ourselves in the monsoon season once again. Our familiar friend that brings life-giving rain, yet larger sea-swells, cloudy skies yet cheap hotel beds! At Simba, this annual event can be the hardest to explain, especially predicting trips to distant islands. With this in mind, the following is a brief introduction to the monsoon more generally, and then how this affects us.

What is the Monsoon? The word monsoon literally means ‘season’ in Arabic. Traders traveling the waters off the Arabian and Indian coast noted for centuries that dry, cool, northeast winds blew for 6 months and then suddenly changed to warm, moist air from the southeast. So in a nutshell, the monsoon weather is a change in the type and direction of winds (and therefore swell) that brings moist air.

When and how does it work?

Between April to September, the wind blows from the southeast as the land mass of India, the Himalayas and beyond heats up relative to the ocean. This causes moist warm air from the Indian ocean to rush into the gap as the warmer air rises. This is the moist ‘maritime’ air that brings the monsoonal rains. Between October and March, this phenomenon is reversed, as the temperature of the Indian Ocean is warmer relative to the land. This pulls dry, cool ‘continental’ winds. This is often called the ‘dry’ or ‘high’ season.

What Does this mean for Phuket?

Phuket is a very small island in a big neighbourhood! To our west sits the Andaman Sea, the bay of Bengal and the India Ocean. To the north and north west of us sits the giant landmass of India, the Himalayas and beyond. These are the major players in this titanic tug of war, and we are simply a spectator sitting a little too close! We very much experience the Monsoon phenomenon and our seasons reflect that of India (as above).

What does this mean for Simba Sea Trips?

We essentially travel to two different regions. Phang Nga and Phi Phi, both east of Phuket itself. Phang Nga luckily sits in a protected bay north east of Phuket. It is protected not only by Phuket itself, but the mainland of Thailand. Although there are still some relatively open passages of water, we’ve found average sea swells to be 1-2 meters less than Phi Phi. We also travel perpendicular to the mainland, and being on a boat, the closer to the protection of land the better!

Phi Phi unfortunately sits 50km south west of Phuket. It normally takes us between about an hour 15 to get there by boat in relatively open waters. Although Phuket Island does offer some protection initially, the second half of the journey is in open water, where swells average 1.5 meters and can get as high 3 meters.

Despite the predictability of the monsoon as a phenomenon, the severity of the winds can intensify and relax as low pressures form and dissipate (hence the variation in swell). This is what we monitor on a daily basis and forms the backbone of our decision making (whether to go/cancel/change destination).

Its not all doom and glom however! An enjoyable trip to Phi Phi is still very much possible, there is just a relatively increased chance cancelation/change destination).

What can I expect on a Monsoonal day on the water?

Well… moist air obviously! Often described as overcast, it’s more like a washing machine of clouds competing for space. Low, mid and high band clouds fall, gather pace and dissipate, if you are into weather it can be a magical and awe-inspiring sight. The very unpredictable nature of these clouds does mean they often give way to rays of sharp sunshine, but they also form storm clouds that dump 10-20 minutes of heavy, warm, tropical rain!

So expect a little rain, expect a little wind but with this comes of the best visibility, wildlife, vegetation and natural vitality. What the monsoon does bring is life and it’s magical to see it up close!

Check our tips on what to do on a rainy day in Phuket.