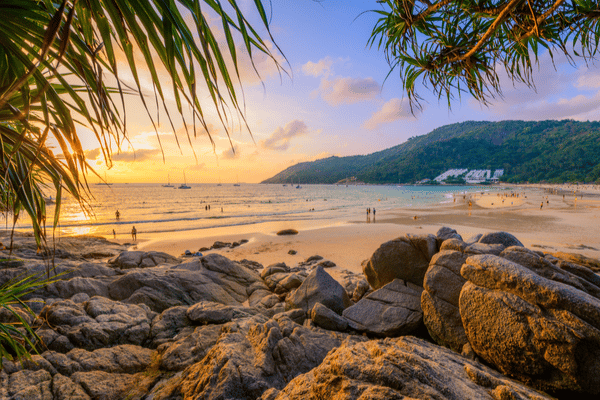 The ABC’s of Phuket Weather If you are planning a holiday to the spectacular Phuket region it is essential to know the best time to visit Phuket and the weather conditions that you are likely to encounter while on your island adventure. This article will detail all the crucial information you require in order to best plan your island getaway to, what we consider, to be the most incredible place on Earth! Thanks to a tropical climate, the weather in Phuket varies drastically depending on the period in which you are visiting. Below is a monthly breakdown of the Phuket weather so that you can be best positioned to plan your island escape:

FEBRUARY – In the short month of February the temperature really starts to rise with rainfall really drying up considerably. The average maximum is 33 degrees Celsius with an average minimum of 23 degrees. Rainfall in February is at an annual low with just 30mm falling on the island during this period. There are also 9 hours of sunshine per day making February the brightest month of the year.

MARCH – Throughout March the temperature will reach its highest point with an average maximum of 34 degrees Celsius. The nighttime temperature is also considerably high with the average minimum for March coming in at 23 degrees Celsius. There is slightly more rainfall in March compared to February but not by much, with just 40mm of rain likely to fall during the month. There is also an average of 8 Daily Sunshine Hours throughout the 31 days of March.

APRIL – In the month of April, Phuket experiences a significant change in the amount of rainfall that it receives. While the temperature is similar to that of March, you’ll be likely to experience between 10 and 11 days of rain, with an average 150mm falling on the region within this period. The average maximum temperature in this period is 33 degrees Celsius while the average minimum temperature climbs to 24 degrees. There is also likely to be 9 hours of sunshine on average during the month of April.

MAY – During May, the average high temperature drops to 32 degrees Celsius while the average minimum temperature rises to 25 degrees which is indicative of a tropical climate. This is Phuket Weather to a tea! The average rainfall also climbs to 200 mm for the month with an approximate 18 days of rain. The amount of sunshine hours decrease. This is especially the case towards the end of the month with an average of 8 hours of sunshine per day.

JUNE – As we reach the middle of the year, the average maximum temperature remains stable at 32 degrees. While the average minimum continues to also remain stable at 25 degrees celsius. In Phuket during June, the average monthly rainfall reaches 240mm with approximately 18 of the 30 days likely to experience rainfall. There is also likely to be a reduction in daily sunlight hours with an average of just 7 hours of sunlight per day during June.

JULY – The month of July is one that is generally to be avoided for those looking for the ultimate Phuket holiday. With an average maximum of 31 degrees Celsius and an average minimum of 25 degrees Celsius, Phuket weather might seem great at this time but that is not the case. A sign that monsoon season is approaching, the average rainfall for July hits 300mm with 20 days likely to experience significant rainfall.

AUGUST – The upwards trend in monthly rainfall is reversed usually during the month of August. There is usually a reduction in total rain during this period with an average of 260mm falling throughout the month. The average maximum temperature remains steady at 31 degrees Celsius and the average daily minimum also remains stable at a warm and balmy 25 degrees. SEPTEMBER – Considered the height of the monsoon season, the weather in Phuket during September can be considered temperamental to say the least. During this period the average maximum temperature drops to its lowest level at 30 degrees Celsius while the average daily minimum also drops a degree to 24. The rainfall during this period is the major issue with a sizable increase to 400mm of average rain falling at this time in phuket. There are also likely to be at least 21 days of rain during this period which makes it the least desirable month to travel to the region.

OCTOBER – In October, you are likely to experience constant rain throughout the majority of the month, although the severity of the downpours are unlikely to match that of September. The average minimum temperature remains stable at 24 degrees Celsius, although there is a slight increase to the average maximum to 31 degrees Celsius. Residents of Phuket Thailand in October will likely have the umbrella out for 23 days of the month.

NOVEMBER – Come November, the rain is starting to disappear with 200 mm of average rain a big decrease on the previous 4 months, the number of rainy days also decreases to approximately 16. The average maximum temperature remains constant at 31 degrees while the minimum average temperature drops to 23 degrees Celsius. During the November Phuket time period, tourists start returning in droves.

DECEMBER – To round out the year, the December period spells a return to the height of tourism with average maximum temperatures reaching a pleasant 31 degrees and the minimum average remaining at approximately 23 degrees. In December, the rain practically dissipates with only approximately 60mm of monthly rain falling during this period of high tourist activity.

Why we recommend May travel

In our opinion, the best month of the year to travel to Phuket is May. So what is it about Phuket in May that we love so much?

While Phuket may weather may not be the most ideal choice on the surface, there are two major reasons that we consider it the best time to travel.

Firstly, the weather in Phuket in May, especially early in the month is still filled with warm and sunny days and the start of the monsoon doesn’t kick in until about the 20th.

Secondly, the fact that it is getting close to the end of the peak season means that tourism numbers are steadily declining and this creates two advantages:

Lower travel costs – you are likely to get cheaper costs and accommodation when traveling within this period.
Lower tourism numbers means fewer crowds – This is ideal for traveling to some of the most spectacular islands in the region as the beauty of the locations can sometimes be dulled when you are elbow to elbow with other tourists.

This is why we consider the May period the perfect time to book your Phuket boat tours with Simba Sea Trips and to maximize the trip with glorious sunshine and idyllic weather conditions.

If May doesn’t appeal, or you can’t schedule a trip to Phuket at this time then that is perfectly OK. Anytime trip scheduled between November and May is bound to be one that delivers spectacular beach weather and unforgettable memories.

However, be aware that if travelling to the region at this time you will be doing so with thousands of others. If this is the case, you’d want to ensure that you at least make the effort to do so in the absence of crowds wherever possible.

For those, who will be visiting Phuket on rainy days we have prepared a list of 5 things to do in Phuket when it rains.