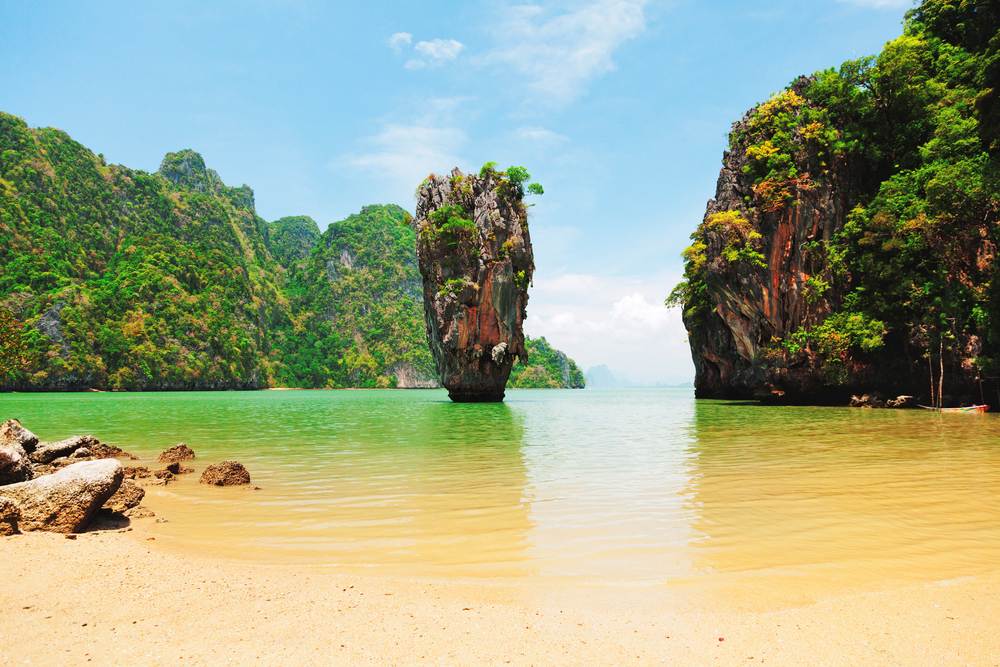 If you’re lucky enough to be traveling through this beautiful part of the world and find yourself researching what to do while you’re here, then you’ll come across a countless number of tour options to visit Ko Tapu (James Bond Island). This Island is also sometimes referred to as James Bond Beach and the vista has appeared in the James Bond Movie “The Man with the Golden Gun”. 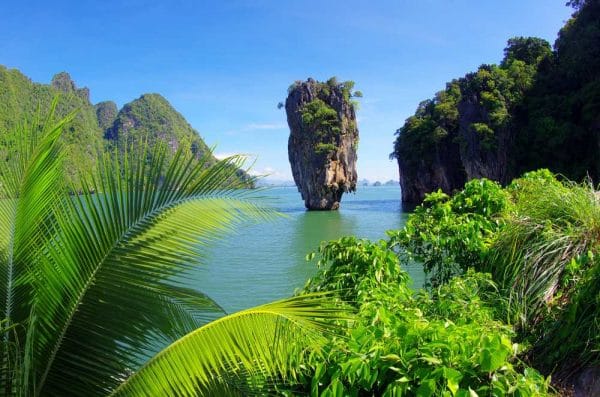 If you’re a James Bond fan and find yourself asking the question, where was The Man with the Golden Gun filmed? …then here’s your answer. More on this later.  Also, Star Wars III- Revenge of the Sith used this local scenery as a landscape for the planet Kashyyyk.

Its main drawcard is obviously its stunning natural beauty. The merge of green of the nature and the crystal waters of the beach mix to create a spectacular memory with one of the world’s most beautiful destinations on the planet!

The region Phang Nga, named by King Rama III post the Siamese-Burmese war in 1824 is also known for its’ archaeological significance with paintings dating back over 1000 years, and a very interesting anthropological history with a diverse range of inhabitants from Muslim Malay fisherman to traditional local Thai settlers in more recent years. The name itself Phang Nga is an adaptation of the Malay language indicating the area was likely inhabited by Orang Asli or other aboriginal people in centuries gone by.  These people were known to heathen, primitive and pagan like people.

Book your seat on one of next available Phuket boat tours!

Why is it called James Bond Beach?

The short answer is….   It’s not!  Ko Tapu, or more commonly known as James Bond Island, is actually a limestone tower that juts up out of the water and is viewed from the island of Khao Phing Kan. This island has a beach on it which may be referred to as James Bond Beach, as this is the island where thousands of tourists will view the famous Ko Tapu (James Bond Island) each and every day. Nevertheless, the world knows this specific beach as James Bond Beach, Thailand, and that is how it is mainly remembered.

Where is James Bond Island? 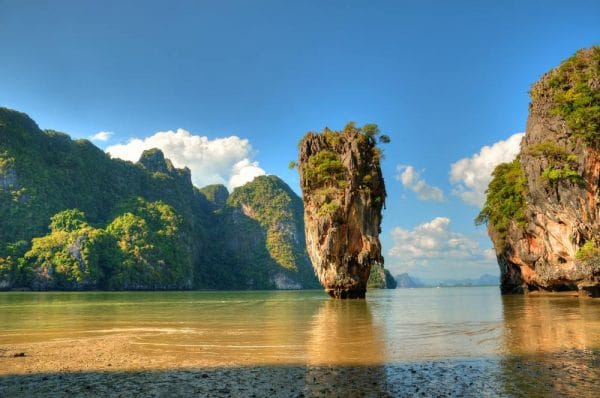 If you’re looking at a map of the region around Phuket, the body of water to the right of Phuket Island is Phang Nga Bay. It’s a bay that’s protected from the elements all year round as it is bordered by land on 3 sides.  Phuket to the west, Phang Nga province to the north, (the nearest town Phang Nga shares its name), and the Krabi province to the east.  This is one reason, boat tours to the James Bond island are so popular, as the water conditions are benign year round, especialy at the popular James Bond Beach

Once you visit this amazing location you will be able to capture the most impressive photos of your life at one of the most beautiful destinations on the planet. Swimming in the smooth clear waters of the bay you will enjoy the gentle sun and become one with the nature surrounding the bay and the James Bond Beach

What is there to do on James Bond island?

This is a commonly asked question, and the most straightforward answer is…sightseeing.

Here we are, at the epicentre of one of the most picturesque waterways in the world.  It is actually part of the same limestone reef that features in the famous regions of Halong Bay in Vietnam, and the area in China near Guilin, Yangshuo.  Unlike Vietnam and China where both areas are designated as UNESCO world heritage sites, this region carries the title of a Ramsar protected site.  This is also overseen by UNESCO and is designed to protect wetland sites designated to be of international importance.  More info on this can be found here.

So apart from world class scenery in the area, there is a very interesting natural diagonal wall for some great photo opportunities, an opportunity to shop at some stalls and buy souvenirs and trinkets from local vendors, and last but not least… the bragging rights to say “I’ve been there!!”, next time you’re watching The Man with the Golden Gun. Once you visit this amazing location you will be able to capture the most impressive photos of your life at one of the most beautiful destinations on the planet. Swimming in the smooth clear waters of the James Bond Beach you will enjoy the gentle sun and become one with the nature surrounding the bay.

Have fun with your family, friends or significant other in a destination beloved by all the tourists that have visited it. Enjoy the merge of the blue and the green, while admiring the amazing limestone tower that has been naturally formed over thousands of years and experience the jaw dropping sunsets and sunrises over the islands.

How to get to James Bond island

The only way to get here is by boat.  Whether it be by speed boat on a tour such as the Phang Nga Bay tour, a long-tail boat from the nearest land-based jetty (which there are numerous in the Phang Nga province), a private charter from nearby Phuket, or by a larger boat tour also departing from Phuket.

A word of warning on the large boat tours often touted as ‘safer than speedboats’.   These are modified fishing boats that have extra passenger decks built on top of their hulls, which often carry upwards of 70-100 people with canoes for nearby sightseeing.  Under most weather conditions, these boats are safe. Be aware though, under high wind or wave conditions, their top-heavy designs can lead to inherent instability and potentially dangerous boating conditions.

You will also find a large disparity in pricing from one tour to the next when researching the available options.  All I can say is, read the details of the tour carefully.  Ask questions like, how many people will be on board? What type of boat? How much commission is being extracted from your purchase? There are all sorts of boats ranging from small, budget long-tail fishing boats, to large speed boats jam-packed with 40+ passengers, slow boats with 100 or more passengers and of course the more luxury end companies that offer private tours and smaller group numbers.

From the mid-east coast of Phuket, a speed boat will take approximately 50 minutes to reach James Bond Island, and the vast majority of visits to this island will include stops at nearby areas of interest for canoeing or beach visits. Larger, slow boats may take 2 hours or more to reach Ko Tapu depending on the departure point from Phuket.  In general, you can expect your boat excursion to be between 6 and 10 hours with the additional stops nearby accounted for.  Depart early and beat the crowds!

Let’s have a look at this pop-culture fascination with James Bond Island in more detail.

The Man with the Golden Gun, a Roger Moore Bond, filmed in 1974 is one of the major catalysts for tourism to Phang Nga bay.  Since the screening of this film, tourists started flocking to this part of Thailand by their thousands, initially causing substantial problems of excess tourism leading to many local problems, including but not limited to litter. In 1998 the Ao Phang Nga National Park was formed and the area is now better controlled and tourism is much more sustainable.

Here are a few quick highlights of The Man with the Golden Gun to refresh your memory, if you’re not the avid Bond fan.

The plot in this Bond film has 007 tasked with tracking down a crucial device called the Solex Agitator which has fallen into the wrong hands and being used to create a powerful weapon, with a destructive energy laser beam.  This is what brings Bond to our beautiful island Ko Tapu…. Scaramanga, the villain’s hideout.

Scaramanga’s character profile has him similar in skillset and traits to James Bond.  Another famous character you may remember is Nick Nack, the French born, dwarf actor Hervé Villechaize, later to star as Tatoo in Fantasy Island.

Perhaps the most famous scene of this movie is where Nick Nack adjudicates a gunfight between Bond and Scaramanga.  Facing back to back, with James Bond Island in the background, Bond and Scaramanga with his famous, custom golden gun in hand. They take their paces away from each other for Bond to turn around ready to fire, to find Scaramanga has vanished.

On visiting our beautiful James Bond Island, most tour companies should have the golden gun props available to re-enact this famous scene with your travel partners.

This installment of the Bond series of movies is actually one of the poorest performing movie of the whole collection (4th lowest returns). It owns quite average reviews from the critics.

So should I go to James Bond Island?

Despite the reference to arguably a B grade movie of the 1970’s, James Bond Island is most certainly worth a day trip from your Phuket, Krabi or Khao Lak holiday.  Many say the actual Island itself, Ko Tapu, is a just another rock… and frankly, I tend to agree.  However, this must be placed in context!  The whole area surrounding James Bond Island, is truly spectacular, with amazing geology, an abundance of wildlife. Enjoy a diverse cultural background and postcard scenery whichever way you look.

You’ve come all this way to Thailand and many tourists will ask the question, do I visit Phi Phi or Phang Nga bay?  The answer is both.  Why spend all that money to travel so close to world famous waterways without actually visiting them? Each destination shares a similar type of limestone karst rock formations, but they each have their own points of distinction. They are both world class in their own right.

Phi Phi has more underwater activities with many coral reefs and snorkeling opportunities.

The James Bond Island(Ko Tapu) area incorporates caving, sea canoeing in and out of mysteriously hidden lakes inside small tropical islands called hongs, and visits to one of the 42 islands within Phang Nga Bay.

Don’t miss this spectacular part of Thailand that’s so close to Phuket.  It’s not only the James Bond Beach, Phuket itself has nothing that rivals it in terms of scenery. You won’t regret it! 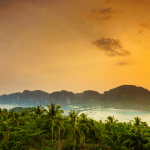 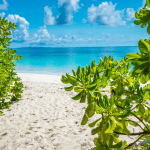 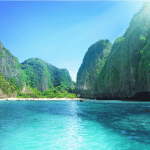 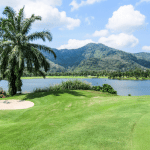 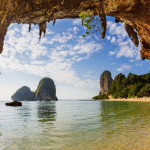 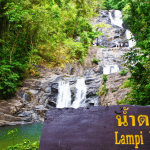