Phang Nga – One of the world’s most famous bays 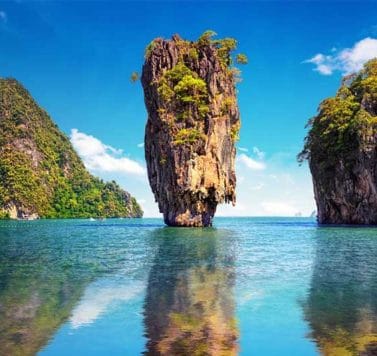 Phang Nga – One of the world’s most famous bays

Where is Phang Nga Bay

Along with the Phi Phi Islands, Phang Nga Bay remains the most popular destination for Phuket visitors in the post-covid era and is quicky returning to pre-covid levels of tourism. What is it about Phang Nga that makes it so appealing for tourists, and why do so many add it to their travel itinerary. Phang Nga Bay is located next to the Andaman Sea which in turn forms part of the Indian Ocean.  It’s on the west coast of Thailand and lies to the east of Phuket Island. Phuket is its nearest city. It is easily accessed by all forms of transport with an international airport and cruise ship port.  Three major towns surround Phang Nga Bay. Phuket town to the west, Krabi town to the east and Phang Nga town to the North, of which the bay is named after.

The bay covers an area of 400 square kilometers and comprises of 42 islands. In 1981, the Ao Phang Nga National park was formed. The area was later classified as a Ramsar protected (World heritage) site # 1185 of significant ecological importance in 2002.  It is quite a shallow bay and protects one of the largest native mangrove forests left in South East Asia. Hence, increasing its importance and the need to take care of its environment.

Coral reefs are less frequent in the northern parts than they are the south of Phang Nga Bay as the floor of the bay to the north is mainly mud. The water levels have risen in relatively recent times.  Only 10,000 years ago, we would have been able to walk from Phuket to Krabi.

A local fishing industry has existed in these waters for hundreds of years and they today co-exist alongside National Parks and the tourism they bring.  Phang Nga Bay was thrown into the international spotlight in the late seventies which led to massive growth in Tourism in the 1980s. The area struggled to handle the volume of visitors.  It went through a period of being littered quite badly but has since been managed to international standards after the formation of the National Park and formal management has taken place.

How to get to Phang Nga Bay from Phuket?

One of the most asked questions is ‘How to get to Phang Nga Bay from Phuket’ since many Phuket visitors are eager to visit one of the most famous bays in Phuket. There are numerous marinas to catch a boat from Phuket out onto the bay.  These are all located on the east coast of Phuket, the opposite side to the majority of the touristic areas and its beaches. Phuket is quite a large island, approximately 40 Km from North to South, and traffic can be quite heavy during the day.   So this is important to consider when planning your visit out onto Phang Nga Bay. Some of the departure points could be over a one hour drive from your accommodation. Two of these marinas, Ao Po and Yacht haven are at least 1-hour drive from the main tourist area of Patong.

How to get there earlier

The best advice I can give to mitigate this problem is to focus on one of two marina’s that are centrally located on the east coast, Boat Lagoon Marina and the Royal Phuket Marina. These are next door to each other and are no longer than a 35-minute drive from anywhere within Phuket. Royal Phuket Marina is a picturesque 5-star marina with beautiful boats and property on display, whilst Boat Lagoon also has plenty of beautiful boats, but it is also an active ship repair yard and this is the first impression you get of the place on arrival.

At both of these marinas, you will find many tour boat companies offering many tours to famous bays in Phuket including Phang Nga Bay Tours. Choose carefully though, as the quality of these tours varies dramatically.  It’s best to depart early in order to avoid traffic on the roads and also beat all the crowds out to the bay.  Some of the key hotspots can become quite crowded with tour boats which will detract from the experience. We suggest a 7 am departure.

Why is Phang Nga Bay so famous?

Undoubtedly, it is the spectacular limestone karst rock formations that jut up out of the sea that makes this area so famous and picturesque.

Approximately 200,000,000 years ago, scientists have proven the earth’s land mass was all connected as one piece. As this land mass separated into plates and drifted apart, the clashing of converging plates together is what formed most of the  world’s mountain ranges, other than the classic round volcanic type of mountain such as Mount Fuji we’re all familiar with (which of course is formed by hot, molten lava having been dispersed). The rock formations we see at Phang Nga Bay were pushed upwards as these plates have clashed together.

This area was previously under the sea and contained many coral reefs.  The resulting type of topography that is so fascinating actually covers quite a large area to the north of Phang Nga Bay, over 100 km’s into the Phang Nga province mainland, and also 100 km’s to the south around the Phi Phi Islands. Interestingly, the same type of geological formation is also seen at the World Heritage listed site of Halong Bay in Vietnam, and also Yangshuo, near Guilin in Southern China.  This indicates they are perhaps the same plate with the resultant topography formed by the same collision. Mother Nature can be truly fascinating!

The limestone we are viewing here in Phang Nga has a high calcium content which contributes to its coloring process.  Over millions of years of erosion, the chemical weathering process of carbonic acid creation has little, by little eroded these rock formations into an amazing collection of cliffs, hidden caves and hongs, sinkholes and underground streams, creating a truly fascinating place to explore.

What to do in Phang Nga?

A trip out to Phang Nga Bay with any reputable tour company such as Simba Sea Trips will have you swimming at stunning secluded beaches, exploring amazing caves with their stalagmite and stalactite sculptures on display, kayaking in and around beautiful natural cathedral-like hongs and dining at authentic family run, Thai restaurants.

Animal lovers are also very well catered for at Phang Nga Bay. On a typical day, you can expect to see a vast array of up to 88 different species of birdlife. From sea eagles to Brahminy kites, hornbills, rare woodpeckers, kingfishers and swallows.  The areas mangroves bring an abundance of wildlife. The remainder of the land is dense, lush green jungle covering all the remaining islands also rich in wildlife. Inside Koh Panak hong you can expect to see walking fish and monkeys if you stay quiet. Other animals of note that can be found are dugongs, the endangered white-hand gibbon and the black finless porpoise.  Fish life is also prevalent with over 80 species recorded also.

It really is quite special to hear the sounds of the jungle inside the hongs of Phang Nga Bay.  The natural amphitheater design creates very good acoustics. The ‘silence’ in a jungle where you can hear nature can be fascinating.  Another good reason to be on an early departing tour to beat the crowds of people. With all this natural beauty around you in Phang Nga then it’s only natural to discuss photography.  For landscape photography enthusiasts, you are absolutely spoilt for choice in Phang Nga Bay. Please be careful if you plan to use drones in Phang Nga Bay. Drone use is banned inside of National Parks, so you may be fined if caught.  In saying that, respect, a big smile and a friendly attitude will generally go a long way in Thailand. I suggest asking the national park officer’s permission if they are present where you intend to use your drone, and they will probably oblige. James Bond Island, or Koh Tapu, is made famous from its appearance in the James Bond movie, ‘The Man with the Golden Gun’. It features the typical rock formations that have made Phang Nga Bay Bay so special. The landscape was also used in the Star Wars movie, Revenge of the Sith, containing that ridiculous character Jah Jah Binks. It is quite touristy here, with many trinket stalls set up by local vendors. I suggest getting to James bond as early as possible.

Koh Panyee is an intriguing fishing village built entirely on stilts at the mouth of a river in the northern end of Phang Nga Bay.  Towering over it, is a massive limestone cliff, providing some great photo opportunities. Our Phang Nga Bay and Koh Panyee tour visit here for lunch at a delicious, rustic Thai restaurant.

Hong Island, is the ‘go to spot’ for kayaking and another of the famous Phang Nga attractions.  Climb aboard in pairs and be paddled around by local paddlers as you explore peacefully, paddling in and out of caves and hongs.

As a resident here for many years, and the owner of a tour company that operates into this beautiful landscape every day, it is still awe-inspiring even after having seen it countless number of times.

Discover Phang Nga bays one by one and enjoy a day full of activities! It is certainly not to be missed.

Thailand National Parks – The most breathtaking parks in the world