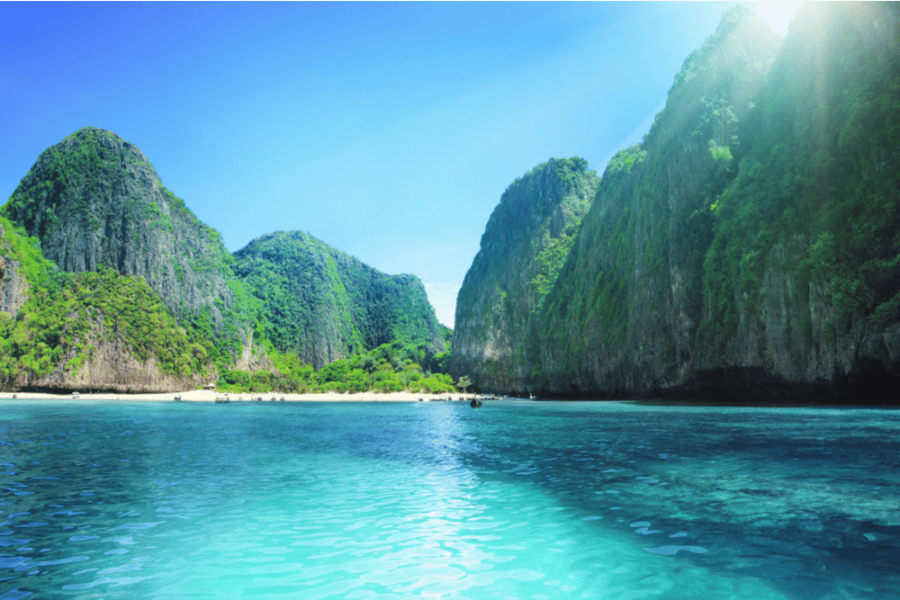 Is Maya Bay open? Yes! Maya Bay, which is the most recognizable landmark within the Phi Phi Islands, is one of the most popular and gorgeous beaches in the world. It acquired its fame after the movie by Danny Boyle, “The Beach”, which starred Leonardo DiCaprio, was filmed there in the year 2000. After the movie was launched, the beach could bring over 5000 tourists every day.

Great news to all tourists looking to visit Maya Bay in the Phi Phi Islands. As of October 1st, 2022, Maya Bay is back accepting visitors and ready to welcome you and your friends and family back!

Why did Maya Bay close?

The movie “The Beach” elevated the status and popularity of Maya Bay as well as the Thai tourism industry as a whole, increasing Maya Bay tours. That said though, such popularity also came with its disadvantages. With lots of tourists visiting the bay for like 19 years, the beach eventually became damaged as it could not sustain the massive tourism.

It was unfortunate when Maya Bay closed temporarily because that severe damage to the bay’s environment. A lot of the coral as well as plants died because of that drastic rise in visitors. So, the Thai authorities were forced to close it to allow for the recovery of the ecology.

The initial plan was that the bay be closed from 2018 to October 2018. Those few months wouldn’t have been enough for complete rejuvenation of the bay and the park. The marine required more time to recover from the pollution and littering that had been done for years by tourists and boats. The coral on the other hand grows about a centimetre in a year so for the bay to become fully restored, it will take a number of years. Luckily that temporary closure has brought about some positive results. People have started sighting blacktip reef sharks swimming at the bay.

Is Maya Bay open to the public in 2021 as it had been expected? First off, one of the things that Prof Thon Thamrongnawasawat advised the department of National parks in Thailand is that once the bay reopens, it would be prudent to limit the number of visitors and probably ban boats from anchoring at the bay waters.

The proposition is that the visitors access the bay from Loh Samah Bay and trek through Hat Noppharat Thara – Mu Ko Phi Phi National Park. There are also plans underway to construct a new Pier on Phi Phi Lee to be the drop off and pick up spot for visitors.

One of things that may have really helped when Maya Bay closed was the COVID-19 travel restrictions to as tourism dropped. As it seems, the bay is still closed. Unfortunately, seeing as the locals heavily rely on the tourism industry, the closure has really put a strain on their livelihoods. Wattana Rerngsamut, head of the local tourism association is proposing a public hearing so that the local people can resume their normal way of earning their living through Maya Bay tours.

The thing is, Maya Bay used to generate about 400 million Baht a year. Much as tourism is a large part of Thailand’s economy as well as for the locals, the ecosystem usually suffers in the process. So, this strain on the ecosystem didn’t really come as a surprise. Maya Bay isn’t the first beach to be closed in the region and it probably won’t be the last either because of excessive tourism.

The thing is, tourism and nature have to compliment one another. So, Thailand authorities are doing their best to strike a balance between preserving nature and tourism. That is why May Bay closed. But the thing is, locals don’t really understand how to conserve the environment and they are not very happy about the closure of the beach.

Top officials are contemplating reopening this famous beach in the country because they have realized that the reopening will give the country’s tourism industry the boost that it requires. The proposal is to limit the number of visitors to say 350 a day. Before the final go-ahead of the reopening is given, the government is consulting environmental experts.

Is Maya Bay open or opening anytime soon? The thing is, since its closure Maya Bay has recovered tremendously. Conservationists’ efforts have really paid off. The coral nurseries that they planted really thrived in the undisturbed waters during the closure. The fish population has also increased by like 200% in comparison to 2018 and seabirds like egrets and herons have come back to the bay. Much as the beach still remains closed to visitors and boats forbidden from entering the protected turquoise waters of the bay, it’s the hope of both the locals and the Thai authorities that they will open soon and Maya Bay tours resume.