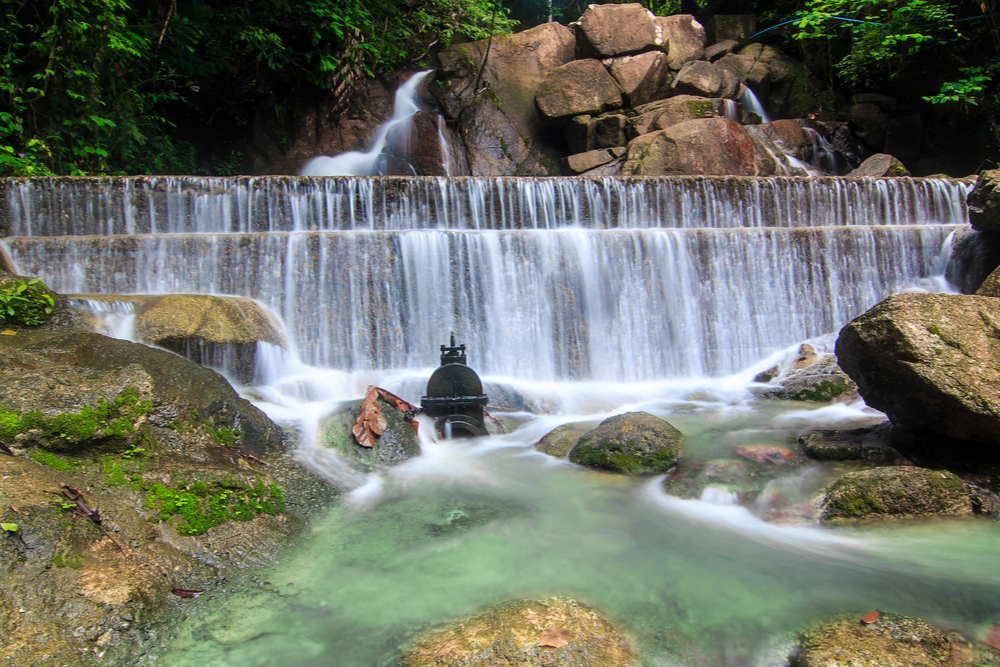 Explore the Kathu Waterfall in Phuket Want to know why Kathu Waterfall is one of the most interesting waterfalls to visit in Phuket? Well, as long as you visit it during the rainy season, you will enjoy this immense series of drop pools to maximum effect and you will realize that this place is worth a look.

The waterfall has two areas of note. On the left looks more like a stream of water that seems to be the perfect natural pool for kids to play in. The left side is perfect for young families. The right on the other hand is where you will find the REAL falls after a small bridge from the parking area. The challenge here is the climb to the top of the waterfall. And the most popular way up is via a 130 metre stone staircase. Luckily, there are shades and various stops where you can rest in case you need to catch your breath.

What to expect at Kathu Waterfall Phuket

Phuket is blessed with waterfalls. This doesn’t come as a surprise because of the combination of the tropical rains and hills. But are they all worth visiting? Unfortunately, most of them aren’t as impressive as Kathu – especially when the reduction of rain reduces the stream to a drip. Plus some of the other waterfalls are in the national parks which means you have to pay some fee. But with Kathu, no fees are required.

Now, I may have talked up the place but that doesn’t mean that now you go expecting Victoria or Niagara falls. Much as it’s the most advertised, it’s pretty small. Plus, almost all falls in Phuket are just a succession of cascades passing through the jungle.

There are 3 main levels involved in the Kathu Waterfall Phuket. The first one is the most stunning especially during the rainy season. Visitors get to enjoy a steady flow of water flowing down the rocks which form a large sandy pool.

You can still get to the second level via a concrete path. However, the path here is narrower but with a more natural look. This is where most teenagers love to hang out, having picnics and enjoying themselves.

The third level is for the courageous. You will get here using a dirt trail. You might also have to do some bit of rock climbing to get to the fourth cascade. These last two are smaller but they are the most refreshing because of the presence of green shady trees. How to get to Kathu falls

One thing that makes Kathu waterfall even better is that it’s not far from Patong – it’s the easiest Phuket waterfall to get to. From Patong, you come over the hill towards Phuket town. You will then find the Caltex gas station. Turn left at the traffic lights towards Kathu market. You will find the waterfall road about 2 kilometers after the market. Pass the houses, small shops, little restaurants and noodle stalls along the road until you reach the end. And there is your waterfall.

Kathu is the highest point in Phuket, approximately 540m above sea level. The ideal time to visit this waterfall is between June and November when there’s plenty of monsoon water. That said though, I am not telling you to visit here when it’s raining. It’s now recommended to avoid traveling here in the wet because the stone staircase I mentioned earlier can get pretty slippery.

What do in Kathu falls

As I mentioned earlier, when travelling with kids, it’s more fun and safer if you take them to the left side of the Kathu Waterfall Phuket and let them enjoy a swim at the drop pool.

If you are one who is fit enough then take the entire hike to the top. There are several pool drops on your way up where you can catch your breath while enjoying the water. You can also enjoy Flying Hanuman, an adventure park that is worth exploring as it is host to a plush jungle via zip lines, sky bridges, and abseil points. There is also a hill behind the waterfall where you can partake in your hiking adventures. As I mentioned before, it’s the highest point in Phuket.

One thing I like about this particular waterfall, is that it can be as easy and as hard as you want it to be. The choice is yours. Enjoy!!!