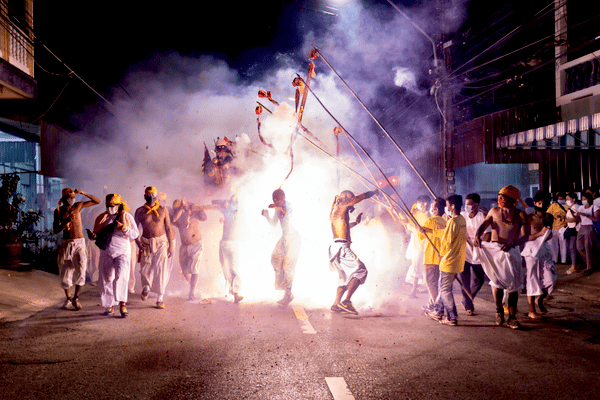 Celebrate at the Phuket Vegetarian Festival

On the eve of the ninth lunar month, people of Thailand come together to celebrate the Phuket Vegetarian Festival, a celebration of the Nine Emperor Gods. The Nine Emperor Gods festival might be a little bit different than what you think when you think of a Vegetarian Festival. If you find yourself in Thailand during the time of the festival (Usually at the end of September) then here is all you need to know. What is the Phuket Vegetarian Festival?

The Phuket Vegetarian Festival is one of the most famous events in the country, especially because of its extreme celebrations and the ideas behind the festival itself.

Mainly, the Phuket Vegetarian Festival is also known as the Nine Emperor Gods festival since it celebrates the invocation of the Nine Emperors and their welcome into the world. The Emperor Gods are believed to arrive in the world through places of waters such as rivers, the sea, and other waterways. That is why most of the celebrations take place at temples, major shrines or locales near this kind of places.

“Vegetarian” comes in place when for the period of nine days, those who participate in the festival wear white and they abstain from eating meat, dairy products and everything in between. Vendors and food restaurant owners mark their places with special signs or tickets in order to indicate that their menu offers options for the vegetarians that attend the festival. The streets are packed with places that offer (basically vegan) vegetarian options for food and they are marked with the yellow and red flags. The food is mainly vegan since this ritual expects people that attend to stay away from everything animal-produced including dairy.

Here is where things might get weird for some people. See, in Thailand, the vegetarian festival may mean something different than what you are thinking. The festival itself comes with some of the wildest rituals of the country. Some of the rituals are not for the faint of heart, that is why we want to issue a spoiler alert for what’s about to follow!

What to Expect at the Phuket Vegetarian Festival? This is one of the bloodiest festivals on the planet. Although there is no carnage when it comes to the festival itself, the tradition has kept some rituals that are unusual for many of us. That is why this specific festival has inherited the title of one of the most extreme and eccentric festivals in Thailand and possibly in the world. If you are a peaceful vegetarian that seeks no violence and a serene experience then maybe you would want to stay away from this festival.

One of the main themes of the festival is a form of self-mutilation. We are talking from simple piercings all the way through to coal walking and tongue slashing to celebrate the arrival of the Emperor Gods. The piercings and the mutilations are usually supervised by medics, but there are still some cases of extreme behavior when it comes to self-mutilation during the festival. There are plenty of people that pierce themselves and pierce their cheeks, not only with small needles and piercings, but during the festival you will see many people with larger items through their cheeks and skin such as rods, tubes, flag posts, and other unusual things. It’s not the most serene of festivals, but it is still an important one for the local communities both social and religion-wise

The event is a Taoist event and it is being celebrated by thousands of people throughout the whole country. It is mainly for the Chinese and Thai-Chinese communities since this specific event is interconnected with the Chinese calendar and it takes place during the month of the Chinese celebrations as well.

The food and rules of the Nine Emperor Gods Festival

During the event, the food is going to be loved by vegan people, since it’s everywhere. There is a huge amount of places that offer vegan food during this period, and everything excludes dairy and meat. From the various restaurants and food stalls to local favorite places. There is plenty of food during the festivities in Phuket. This is because this period demands the devotees of the festival to exclude those things from their diets, including alcohol and sex. Especially the masong. Masong are the people who are spiritually connected with the vegetarian festival, Thailand. This group of people is inviting spirits to enter their bodies, and this is one of the groups that inflict the most mutilations and piercings during this period. Another thing they do is coal walking since they believe if they allow their bodies to get hurt, they can let spirits inside them. In order to be a masong, you have you be an unmarried pure man or women though, so, that is also the reason many pregnant women and people that are mourning during the time of the festival usually do not attend.

Vegetarian Festival Thailand: One of the loudest demonstrations of faith

If you have the luck and the guts to attend this festival, there are plenty of people around the world that gather in order to watch the festivities or even join the crowd. Are you one of the people that will join the Thailand Vegetarian Festival?

If you are traveling to Phuket for the festival, there are plenty of other wonderful things worth doing while you are here. From dining in fine restaurants to strolling down the main district and partaking in the street food experience, Phuket has much to offer. The islands are glorious and should be seen first hand. Do that by avoiding the crowds as well, with one of our amazing tours in Phuket.

So what do you think, are you one of the people that will join the Thailand Vegetarian Festival?