The village of Koh Panyi 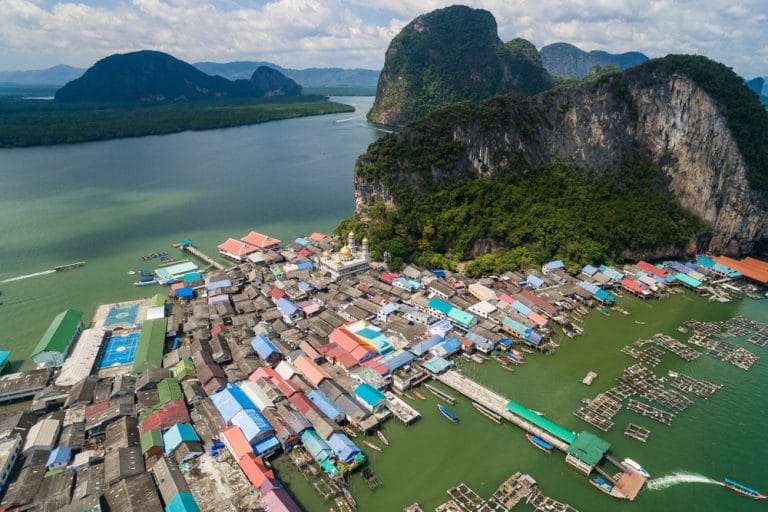 The village of Koh Panyi

Also known as Ko Panyi, this village, built entirely on stilts in Phang Nga Bay near the famous James Bond Island is a village worth visiting. This is an unusual but a very exciting place to explore. You will find lots of seafood restaurants welcoming visitors as they get there. In order to enjoy and be served well, then better get there early.

More about the village of Koh Panyee Koh Panyee Village is a small island community which is approximately 20 minutes from Surakul pier in Phang Nga province by a longtail boat. It’s not very populated… just about 1600 people permanently living on the island. Toh Baboo is the main ancestor. So, these people living there are direct or indirect descendants plus family and friends who initially settled on Koh Panyee Thailand about 200 years ago. The Toh Baboo family and two others left their home in Indonesia looking for a fresh start.

As the story goes, they vowed to each other that the person who found a spot with lots of fish where all of them could live would signal the others with a flag raised as high as possible on a mountain. Find it Toh Baboo did. So became the name Koh Panyee, also known as Ko Panyi, meaning ‘Island of the Flag’ in Thai.

The good thing about Ko Panyi is that you can have it almost for yourself. All you need to do is just rent a car to the Surakul pier in Phang Nga, then hop on to a longtail boat for about 20 minutes. Not as cheap as you might expect though. About 1,500 baht should get you there. But trust me, the fun you will have and the beautiful photos you will take at Koh Panyee Thailand will be worth the while. Just the boat ride itself is amazing. Manoeuvring between mangrove and colossal limestone rocks is fascinating. Then you will get dozen seafood restaurants for some good lunchtime devouring.

Much as Koh Panyee Village is a tourist attraction it still maintains its reputation as a fishing village. They usually have some very good Tom Yum Goong. It is also a Muslim village that was constructed on stilts like 200 years ago beneath a giant limestone cliff. Only a small section of the village where the mosque is sits on solid ground. The other places just grew from there and it slowly keeps expanding. This village is mostly made up of large and almost vertical limestone cliffs with the area where villagers live are built on stilts on top of the shallow sea. This village is uniquely built and its informal engineering makes this place very fascinating.

Koh Panyee Village has a school, a mosque, a health centre, a few big restaurants overlooking the Andaman Sea as well as lots of souvenir shops. For accommodation and overnight stays there are bungalows. The most fascinating feature about this unique place is the floating football pitch which was built by kids from old scraps of wood and fishing rafts. This floating pitch is the reason behind Panyee FC becoming on of the most successful youth soccer teams in Southern Thailand.

When you get to the village, you will be amazed at the hospitality and reception of the community. You will be received by young guides who are very eager to show visitors around. One thing that the community prides itself in is having electricity, internet and water that doesn’t come from the mainland.

Seeing as it’s such an isolated community, the locals really take care of their environment. They have lots of environmental projects such as a recycling program where they collect bottles and cans and once they are sold, the proceeds go to the school. Killing two birds with one stone – making money as well as keeping the Koh Panyee Thailand village clean. There is also a program where the teachers assist and teach the students to grow vegetables using hydroponics.

Much as this is a tourist attraction, the kids are used to being photographed by tourists as they usually go about their daily lives.  Classes go on as scheduled. The situation feels pretty weird.

Koh Panyi is a very vibrant place that is very colourful and with various smells. The place has lots of spots to take photographs.

This village is a Muslim community so woman hear are expected to be dressed decently – no shorts skirts or shorts are allowed. However, T-shirts and jeans are allowed. What isn’t allowed is wearing clothes that expose lots of skin as the villagers won’t take it well.

There are lots of tours to Panyee. Some even include pick-up from the hotel to the village. If you’ve taken part on one of our Phang Nga Bay tours, then an extra day in the region will not hurt. This is a trip worth considering if you are on a tour of Thailand.

What to do in Panwa Beach, Phuket